The percentage of individual health plans with annual deductibles higher than $6,000 plunged from 42 percent in 2013 to just 17 percent in 2017. A deductible is the dollar amount a person pays each year before their health plan starts paying claims. 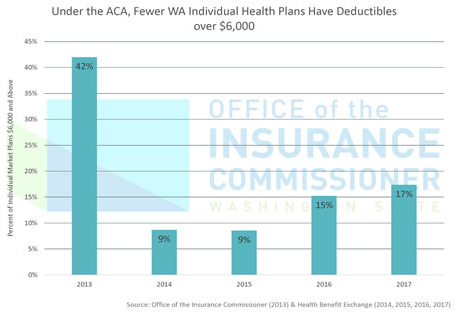 The value of a typical individual plan is much closer to the value of the average employer-sponsored plan – 70 percent today compared to 40 percent in 2013. In other words, consumers are getting more benefits for their money. 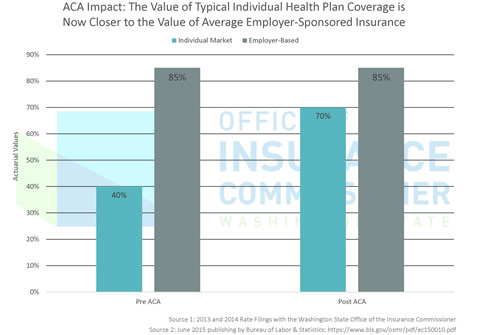 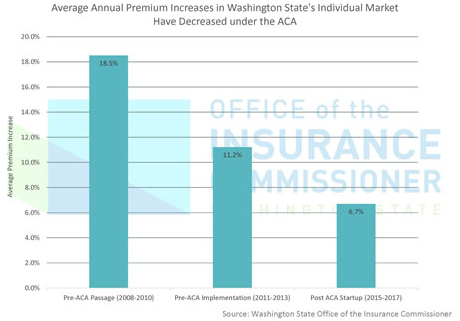 Kreidler also noted the drop in Washington’s rate of uninsured people -- from 14 percent in 2013 to 5.8 percent today. An additional 750,000 state residents gained insurance coverage because of the ACA.

“The facts tell a different story than what opponents are saying,” Kreidler said. “Before the ACA, consumers in Washington were paying a lot more for a lot less. Many went without health insurance. Denials of coverage because of a pre-existing medical condition were common. Many plans failed to cover prescription drugs. My concern is that current Republican plans will return us to the dark days of health care before the ACA.”

Kreidler is analyzing the potential ACA replacement plan proposed by House Republican Speaker Paul Ryan and a proposed rule by the federal Health and Human Services department. Both propose significant changes to the ACA that could seriously harm Washington consumers.

Kreidler said that any replacement proposal must be measured against the progress made in health care and cannot regress, including:

Kreidler’s analyses are expected in early March. The reviews are being coordinated with state and national experts.

“I’ve consistently said that the ACA was not perfect and that improvements need to be made,” Kreidler said. “My focus is on changes that benefit consumers instead of harming them.”